A dedicated day to celebrate one of the greatest composers of Carnatic music, Sri Thyagaraja. His set of five gems known as pancharatna krithis are sung the world over on this special day. The krithis are written in praise of Lord Rama and are set to Aadi tala. Each raga beautifully depicts the mood of the song and the meaning of the lyrics. All are written in Telugu except for one which is in Sanskrit.

Jagadananda karaka – Ragam Natai
The only one of the five gems that is composed in Sanskrit, this krithi is in praise of Ramachandra, one of Lord Vishnu’s incarnations. Thyagaraja describes Ramachandra as the one who is the cause of all bliss in the universe.

Duduku gala – Ragam Goula
In this second krithi, Thyagaraja lists all the errors he has committed in his life and asks Lord Rama for redemption.

Sadhinchane – Ragam Arabhi
The more light and playful of all the krithis, it is aptly dedicated to Lord Krishna.

Kanakana rucira – Ragam Varali
The most haunting of the collection, this krithi is not often sung or performed. It is also rarely taught, as teaching of this raga is believed to cause a rift between the teacher and the student.

Endaro mahanubhavulu
Believed to be composed by Thyagaraja at a young age, it is in salutation to all the great saints and musicians through the ages.

Senior students will also be presenting some of Thyagaraja’s well known compositions.

Come celebrate with us! 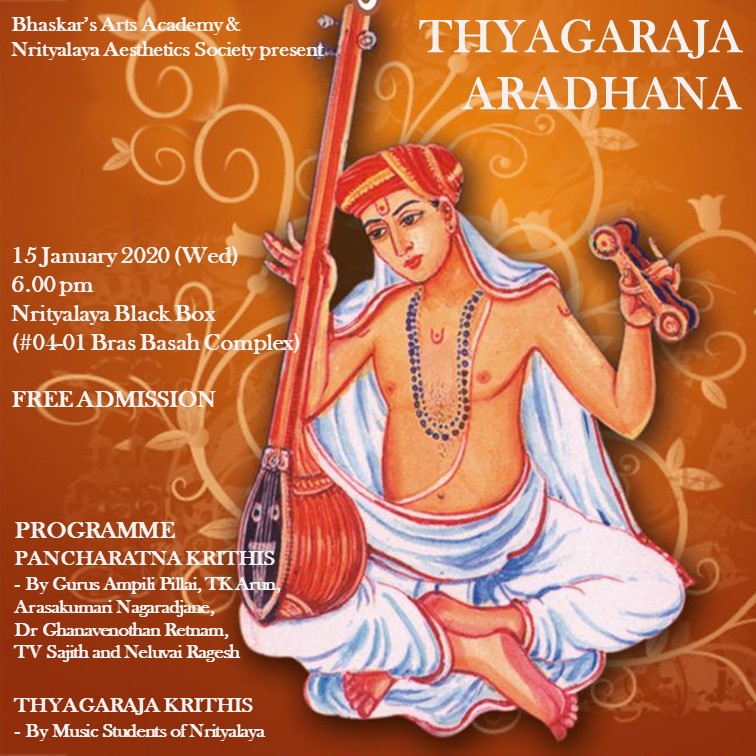